Posted by aliciaescott on July 24, 2015 in Uncategorized |No Comments

Due to a water main break at the Sunview Luncheonette, our planned location 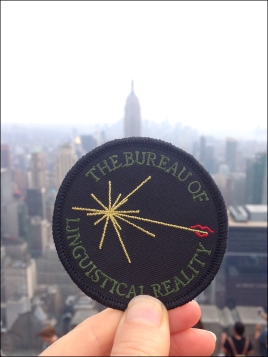 The Bureau went to New York looking for new words to describe emotions and experiences. Here’s what we found:

Our first wordless emotion was Hephzibah Strmic-Pawl, PhD Relating to her feeling around climate change and “an unknown anticipated regret.”

Patrick Paine immediately summed up an image of this idea clearly, relating it to painfully watching a teenager drop out of high school. Knowing how much they don’t understand to what degree they will one day regret that choice. We are still looking for this word to describe the feeling that we will one day look back on this time and deeply regret choices we made or didn’t make relating to climate change. But we watch ourselves anticipating the unknown. Please contact us if you find this word.

When feelings around a sort of fatalistic despondency were raised, Sally Szwed brought up the idea of how we each of our lives as a march towards the inevitable that we are all living a slow death.  How you can mitigate that through informed choices in how you live, and eat— either hastening the march towards death or slowing it. Relating this to our collective choice with climate change, it is here and it will get worse— but its not fatalistic, we can still choose how we mitigate it and how we cope with it. We are still searching for words to describe this sort of budgeting. Please contact us if you find this word.

Sally who works at Creative Time and is putting together their Summit for the Venice Biennale was discussing how excited she was about projects like the Rolling Jubilee, divestment projects and several others that demonstrated an upsurge in projects that were crowed funded but making significant social impacts. she kept saying “I don’t want to sound optimistic…”, or “Im not naively optimistic” at which point The Bureau realized we need to find her and others a word to express hope and progress that hasn’t been taint
ed with naivety, (this is similar to the word we hope to create for Rachel Caplan at our future Science Fiction Field Study of an antonym of for apocalypse that describes a positive, progressive future, but not a utopia which has enmeshed in its cultural definition its own innate failure.)

Perrin Ireland as her existing word brought “fact” defined in wikipedia as “something that has really occurred or is actually the case.” this had some relevancy to our later conversations relating to climate denial.

Aron Cohen defined for us Crust, the definition met his suspicion that the word came from bread. It did. This was found to be a useful metaphor that the word we use to talk about the section of earth in which all life as we know it has ever existed and that we have spent our entire existence as a species is a term borrowed from this very basic personal, intimate domestic word.

Hephzibah, our resident Sociologist for the evening introduced us to some very useful terms that sociologists use which could be applied or modified to discuss many of the topics that were at hand that night.

Playing off of the phrase Coal Rollers, Aron Cohen was looking for a word to describe Climate Rollers his feelings around the rather mad action of people who blatantly choose to increase there carbon foot print, as a sort of tantrum like expression of their rights.

At this point Hephzibah Introduced us to Anomie meaning loosely when an individual or small groups values break away or is broken away from the support of the society and its values, as can happen after a war or natural disaster or through poverty. Climateanomie or Carbonomie ensued.

Another of Aron Cohen’s wordless feelings was “the inability to relate to scale”. Or a disconnect between our personal actions and the enormous scale of our species, and the of the problems.

Again a term was introduced from sociology, by Hephzabah: sociological imagination

or the scaleological imagination and discussed the metaphor of cells relating to a body.

Another feeling that we did not find the words for, that Christopher Reiger had also brought up at our Urban Field Study 05: A termite left loose on a house will eat the house, not because of all the unintended consequences but because thats what termites do. Are we as a species similar? Fatalistically bound to over populate our planet and consume its resources at an unsustainable rate, because thats what we do if unchecked? Does our understanding (through science) of the mess we are making for our selves render us distinct from said termites,  or from over grazing deer or are we bound to the same genetically programed fate? This lead to a conversation about growth based market capitalism

One of the over arching themes of the conversation not yet discussed was relocation, as it relates to cultures, peoples and species. Migrations was discussed: especially the contemporary mass migration to cities, but more so in the sense of a forced action. This was in part inspired by Sally’s recent conversations with folks from ReLocate Kivalina http://www.relocate-ak.org/

climate cultural genocide or indigecide coined by the group which can be loosely defined as “the forced relocation of a people so many times that although, efforts are made to keep them alive as a people via relocation (either imposed, or elected due to climate change) their culture that had been indigenous to a particular ecosystem or place is lost or eradicated due to climate change”. While it was discussed that this was a word created to talk about the experiences of others and not our direct experience on climate change here in New York City, the group still felt this was a useful term. The bureau hopes to reach out to the folks at ReLocate and in Kivalina to get their take on if this is a useful word to describe their experiences. 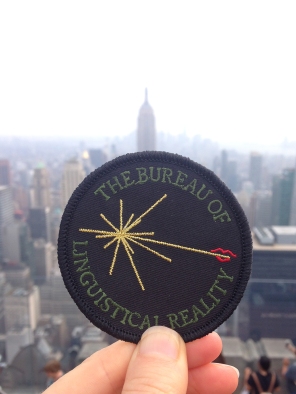 This completes the Bureau Of Linguistical Reality Field Study Report Back #006: NYC .